Our team of water and environmental engineers are continually developing innovative technological solutions to purify mikva water in the healthiest and most efficient way possible. Our company provides water technology solutions for a variety of applications and our clients include municipalities, hotel resorts, businesses and residential clients. The same professionalism and service which we provide to our large clients such as the most prestigious infinity swimming pool in the world, the Marina Bay Sands Singapore Skypark pool, is what we aim to provide to the holiest industry in the world – mikvaot. As orthodox Jews, it is a zechus and responsibility for us to assist in enhancing the mitzva of purity in Klal Yisrael.

We already use chlorine/bromine in our mikva. What are the health benefits of the MikvaTech system in our mikva?

While chlorine is crucial as a residual water disinfectant, chlorine alone does not guarantee that the water is pathogen-free. Chlorine’s efficacy is dependent on other parameters in the water. In other words, you can have a proper level of residual chlorine in the water and at the same time the water will still be bacteriologically contaminated. Water maintenance can be challenging and is dependent on various parameters and not just on the chlorine level. Let’s explore this in more depth.

To summarize, in public swimming pools in Israel the dosing of chemicals is done automatically under the supervision of a licensed swimming pool operator who has undergone extensive training on water maintenance.

In mikvaot on the other hand, the dosing of chemicals is done manually by someone who usually has not undergone any training whatsoever in water maintenance.

Possibly because of these reasons, according to a study published by the Hadassah Hebrew University Medical Center, women who immerse in a mikva are 60% more likely to be carriers of GBS (Group B Streptococcus) than women who do not immerse in a mikva.

Additionally, it is imperative to understand that the efficacy of chlorine is dependent on other parameters in the water. For example, when the pH level of the water rises to above 9.5, the efficacy of the chlorine drops by 95%!

MikvaTech’s system eliminates many pathogens and acts as an important supplementary disinfectant. The technology also assists with the quality and clarity of the water by breaking down organic matter and combined chlorine as extensively explained in the following questions.

Why is chlorine harmful? How does the MikvaTech system break down combined chlorine and thereby reduce the chlorine odor and the eye, skin and respiratory irritation caused by chlorine?

When chlorine is added to the mikva, before it reacts with the contaminants in the water, the chlorine is ‘Free Chlorine’ which is free and able to disinfect the water. After the free chlorine reacts with the contaminants, and is “used up” it is called ‘combined chlorine’. This combined chlorine is not a good disinfectant and is even a health concern. Combined chlorine is what causes the majority of the unpleasant “chloring odor” in a swimming pool and mikva. It is also the primary cause of eye, skin and respiratory irritation in tovlim and balaniyot due to chlorine. These symptoms can be even more problematic for children or elderly balaniyot who suffer from asthma and can include coughing, discomfort in the chest, throat irritation, shortness of breath and other dangerous symptoms.

The MikvaTech system breaks down the combined chlorine and thus reduces the eye, skin and respiratory irritation and lessens the unpleasant chlorine odor.

Another important function of the MikvaTech system is that it acts as a powerful oxidizer.

In swimming pools, the term ‘Disinfection’ is the killing of living microorganisms and contaminates, and the term ‘Oxidation’ is used to refer to the removal of non-living contaminants such as bather waste, metals and nitrogen compounds such as ammonia and urea. Even though the primary reason we maintain a chlorine residual in the water is to disinfect the water so that it is free from dangerous pathogens, the vast majority of the contaminants in swimming pool are non-living oxidants. The majority of the ‘chlorine demand’ is from these non-living contaminants that need to be oxidized.

According to the Israeli Ministry of Health Mikva Regulations, at all times a mikva is required to maintain between 1.5 and 3 ppm of free chlorine in the water as a residual disinfectant.

Although chlorine is a phenomenal disinfectant, it is not the most amazing oxidizer with an oxidation potential of just ~1.36V. So, when someone adds chlorine to the water, a signification portion of the chlorine goes to oxidizing contaminants and does not remain available to act as the required residual disinfectant.

Does the MikvaTech system have regulatory approval and third-party validation?

The water in many mikvaot never leaves the bor tevila and so the water needs to be treated directly in the bor tevila. This is considerably more challenging.

Is the MikvaTech system installed in the water of the Bor Tevila? How do you install the system in a women’s mikva?

The system for women’s mikvaot consists of two separate machines which operate in conjunction:

1) Advanced Oxidation Process (AOP) machine – Developed with the Israeli Innovation Authority, this machine kills bacteria, viruses (including COVID) and other pathogens while destroying the toxic by-products of chlorine/bromine. Our patent-pending technology generates oxygen radicals which are diffused into the water. These radicals oxidize and disinfect the water.

The AOP machine operates on a built-in timer and is operated throughout the night when the mikva is not in use. The AOP machine itself is installed in a machine/otzar room outside of the water. A 0.32” air pipe exits from the machine and is placed in the water. The radicals are diffused into the water through this small pipe and destroy the pathogens and organic matter in the water. The contaminants are oxidized and float to the water’s surface. When there is a filter in the mikva, these floating contaminants are collected by the filter. When there is no filter in the mikva, as in most women’s mikvaot, the AOP is used together with the MikvaClean Skimmer.

2) MikvaClean Mehudar Skimmer –Developed specifically for use in women mikvaot where there is no filter. This is a portable skimmer which is used primarily to collect the organic matter and contaminants that are destroyed by the AOP and that float to the water’s surface. 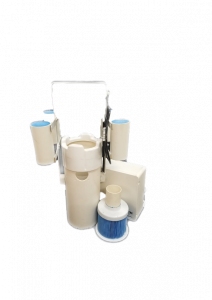 The MikvaClean Skimmer is portable (weighing 9 lbs) and is placed in the water for an hour daily. It also has a built-in timer which can be set in advance in order to operate at a desired time. The MikvaClean is removed from the Bor Tevila before using the mikva.

Does the system have to be operational when the mikva is in use?

Although many rabbinical authorities allow the machines to operate while the mikva is in use, we recommend you consult your local rabbi regarding your mikva. All machines have a built-in timer which allows easy setting of hour of operation.

In women’s mikvaot, there is actually no need to have the system operating more than 8 hours per day. Therefore, in women’s mikvaot, at the time of tevila, the AOP does not operate and the MikvaClean skimmer is removed entirely from the water.

Our vision is to assist every mikva achieve optimal healthy and clean water.
We provide free educational material and advice to anyone looking to improve his/her mikva sanitation and health.

Please feel free to contact us with any questions about the maintenance of your mikva.